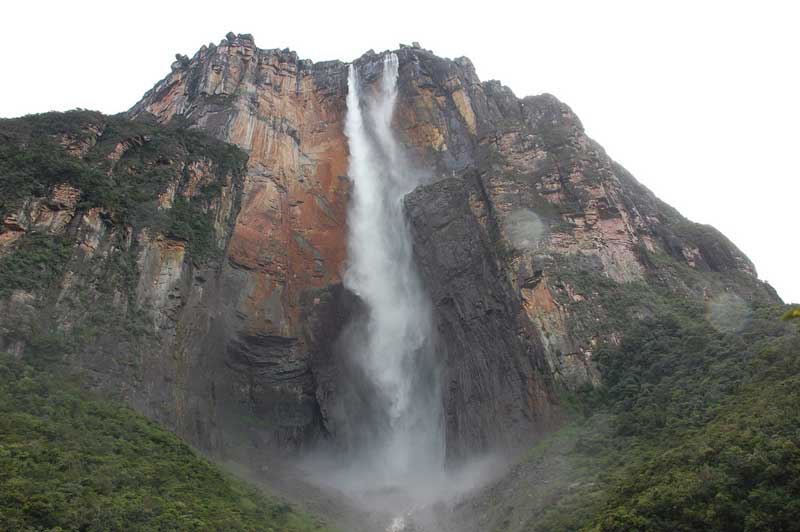 Angel Falls is the highest uninterrupted waterfall in the world. The Falls are located in the Guayana highlands, Bolívar State, Venezuela.

Angel Falls has been declared as a UNESCO World Heritage site.

The local Indian name for the Falls is Kerepakupai Meru meaning “waterfall of the deepest place”.

The name of Angel Falls commemorates a pilot from Missouri, United States, by the name of James Crawford Angel (Jimmy Angel).

The “Discovery” of Angel Falls

Jimmy Angel saw the falls from above for the first time in 1933 while searching for the McCracken River of Gold, or the Golden City.

He returned in 1937 with his wife and two friends. The plane that they arrived in couldn’t take off again. As a result, they have no choice but to trek down the tepuy (table mountain) towards the civilization for 11 days walking in the jungle.

Their return to civilization marked the day that the Angel Falls became known to the world.

However, there is much controversy around the discovery of the Falls and the name by they are known.

There are claims that a Spanish explorer Fernando de Berrio visited the waterfall back in the 17th century, while others state that the first westerner to see the waterfall was Felix Cardona in 1927.

Although Angel Falls is one of Venezuela’s top tourist attractions, reaching the waterfall by land still isn’t straightforward.

WikiPedia has this advice on how to get to Angel Falls;

“Angel Falls is one of Venezuela’s top tourist attractions, though a trip to the falls is a complicated affair. The falls are located in an isolated jungle. A flight from Puerto Ordaz or Ciudad Bolívar is required to reach Canaima camp, the starting point for river trips to the base of the falls.”