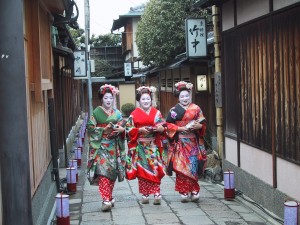 Getting Lost in History at Kanazawa

Kanazawa is located between the Japanese Alps and the Sea of Japan. It was miraculously spared from World War II and remains standing, preserved and unscathed. This city’s collection of cultural charms makes it the go-to destination in Hokuriku. One of the local highlights is the castle garden called Kenroku-en that was built during the 17th century in the Samurai district. There are also the preserved temples, museums and market districts.

If you are fascinated with geishas and samurais, it has districts that preserved samurai and geisha history; it is considered the second biggest Geisha next to Kyoto. As a perfectly preserved castle town of the Edo Period, it has surviving samurai and geisha districts. If you are here are briefly passing by, it will be wise to focus on Higashi Chaya District.

Higashi Chayagai is the biggest of the four surviving chayas or Geisha districts in Kanazawa. This was where geishas used to entertain people since the 17th century. The district looks old and traditional with the classic wooden Japanese buildings forming parallel rows. The Asano River or Asanogawa borders the district borders on one side and the samurai district or okachimachi on the other side. There remain a few surviving samurai residences behind its gated walls.

The Higashi Chayagai buildings are privately owned and are being operated as latticed teahouses like Shima, as bathhouse like the Higashi no yu, and a bread-and-breakfast like Minshuku. For that special tea using tea plus certain twigs called Kaga bôcha, you have to go to Funabashi-ya, which was an erstwhile Sabô-isshô or geisha house.

There are also shops such as the Fukushima Shamisen that has been serving the locals since the mid-19th century, as well as museums, sushi restaurant, wine bars, and e Honjin that once housed the school for aspiring geishas.

A Glimpse of the Geisha Houses

“A Geisha house is characterized with a beautiful lattice called “kimusuko” on the outer side of the first floor and guestrooms located on the second floor. Some of the old houses here have been renovated into restaurants, cafes and souvenir shops but others are still existing Geisha houses. Higashi Chaya District is designated as National Cultural Assets.”

A must-see for all tourists coming to Kanazawa is the Shima Geisha House. A visit to this house will take you back to 1820, a time when Japan’s Kaga federal government made Kanazawa a Geisha district. It is beautifully preserved and looks just as it was way back then so that it is recognized as a National cultural Asset you mustn’t miss.

Peeking into the Samurai History

Samurai is as intriguing. It wasn’t just a weapon; it is a revered emblem of courage, loyalty and tradition in Japan. Warriors use it.

Jena Scattena of BBC Travel was as fascinated; samurai is the inspiration of her blog Get Lost in Japan’s Ancient Japanese Town. It takes the reader to the Utatsuyama neighborhood, where the “Samurai” once lived.

Following Nagashima (the guide) into the labyrinth of teahouses, temples and restored samurai houses, I felt like Alice slipping into the rabbit hole. We walked along the row of beautiful latticed buildings … careened up a steep path …  arrived at the top…

From the top of the hill, we walked into the adjacent neighborhood of Utatsuyama. Samurai once lived in Buddhist temples here, Nagashima explained, working as security guards called boukan…

The guide emphasized that the samurai that once flourished in the city were nothing like the vicious warriors many imagined them to be. He also said, “To defend Kanazawa, the Maeda clan encouraged the samurais to focus on arts and craftsmanship instead of fighting. That way they did not pose a threat to the clan with the highest power, and so were not invaded. As a result, there was actually almost no fighting in Kanazawa for 400 years.”

The Samurai was the highest social caste at the time and they spent much of their time studying, learning and building a good life for them evidenced by the opulent residences and gardens in Kanazawa. Contrary to what most people thought or believed, their utmost weapon was not the blade, but their attention on the arts – “a sly defense tactic in disguise.”

The most impressive structural relic reminiscent of the Samurai Age is the white Kanazawa Castle and the nearby Kenroku-en Garden. In the Nagamachi neighborhood, once home to the elite and middle-class samurai, stand the Nomura House now peacefully adorned by a koi pond and zen fusuma (rice paper panels), instead of samurai memorabilia to immortalize triumphant battles.

The Bullet to Kanazawa

The modern bullet train called Shinkansen can take from Tokyo to Kanazawa successfully cut the travel time by half. You will be met by one of the world’s most beautiful train station, a pleasant reminder that you’re about to have a most wonderful time revisiting Japan’s cultural treasure. Both beautiful and artistic, the geishas and the samurais will leave you in awe.